Today was my birthday, and Alex insisted on helping assist with the celebration.  I was a bit wary as I didn't know exactly what dinosaurs did for birthdays.

We have a tradition in our family that we get to choose our favorite foods for our birthday dinner, and my favorite food is black olives.  I insisted Alex try them, and even told him that he could "fish" for them in the can.

Being a natural fisher, catching an olive was no difficult task.

He loved the olives and devoured them eagerly.

When it was almost time for cake, Alex disappeared, which got my suspicion up, but he reappeared at a wonderful time - in the middle of the cake!

I had to explain the tradition of blowing out candles for your birthday and making a wish.  He was pretty glad there weren't 26 candles on the cake, he thought that might get a little hot.

Then it was time to enjoy cake!  I discovered that dinosaurs aren't the neatest ice cream cake eaters.  Alex wore nearly as much as he actually ate.

After the festivities were over, it was time for Alex to get a bit of a bath to rinse off the delicious cake.  He didn't seem to mind, and loved playing in the water.

In case you noticed, in a few of these pictures Alex is standing in a full bipedal pose without his tail or foreleg.  He still needs a little renovation, but the blog post of his surgeries will be up soon in case others want to modify their dinosaurs too.

Posted by Amber at 10:19 PM No comments: Links to this post

Email ThisBlogThis!Share to TwitterShare to FacebookShare to Pinterest
Labels: Alex

Looking at Safari Ltd.'s shop listing, you would think this model would stand on two legs, in a full bipedal stance.

So, when my Baryonyx arrived in the mail, I was disappointed to find that he needed to either rest forward on a front leg (with the other hovering very near the ground) or on his tail.  His tail seems a bit longer and thinner than in the product image as well.

Compared to the Schleich and Invita Baryonyx produced, though, I find this model more realistic, as it does try to avoid the now outdated quadruped stance.

I would prefer it to be completely in a bipedal stance, and hope to soon give mine some plastic surgery and see if I can get him to balance well enough to stand on his hind legs alone.  Look how handsome he is as a biped (with a little help from me).

Based on a 2008 review by Dino Toy Blog, this model seems to have gotten a slight upgrade since that model was produced.  The model still seems a little on the thin side in the top view, but it's tail is less curved in the top view.  I do love the slight curve from tail to head of the model as seen from the top.

The best upgrade in my opinion is the head, face and mouth which now has far more detail, including individually sculpted teeth instead of painted teeth on a solid gum line.

The eye does remain a solid black, which I personally find attractive, if not necessarily accurate.  The tiny ear hole, outlined with orange is also a nice touch.  I do wish the snout had a bit more of the unique angle found in the fossils, but they did at least try to include it to a degree in the model. 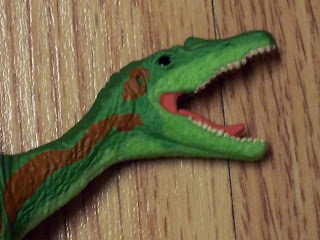 The paint color seems to have gone through a minor change as well, though the green hasn't changed much, the quite attractive markings have gone from a chocolate brown to a orange-brown tone.  Of course, we don't know the color of the Baryonyx, so color is merely artists license, but it is nice to see something a little different than your normal solid brown or green.

The belly is now a lighter green as opposed to yellow and the claws are a dark yellow instead of white.

Aside from the the fact that the Baryonyx must rest on it's front legs, the front legs seem quite realistic in comparison to the fossils.  The distinctive claw that gives them their name is done well. 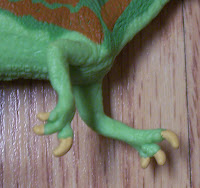 The hind legs are well muscled, but the feet aren't even in the right position to appear that it is in a bipedal stance.  The toes actually don't make contact with the floor when the front foot is resting on the ground.  I hope to correct this in my own model as well, in hopes that lowering the toes will allow him to stand without the need for his front feet, leaving them free to fish.

The bottoms of the feet are also sculpted, not just being flat but including detail.  The feet may be slightly small in comparison with the rest of the body, but since the feet bones are missing from the fossils found to this point, it is hard to tell if they are realistic or not.

The thing I really like about this model in comparison to some of the others, in addition to the realism compared to the skeletons, is the "action pose" of the model.

Unlike the static quadrupeds  this Baryonyx looks like he was captured in motion.  With one foot forward, ready to snag a fish out of the water and his mouth open and ready to bite, this model is ready for action.

I will be posting a review on the Carnegie Collection Baryonyx soon, but don't have it finished quite yet.  During the photo shoot, Alex managed to make a friend though.

My dog thought I was sitting on the floor to give her attention, and when I didn't, she decided to ask Alex for some scratching.

Alex obliged, but I had to stop him before he took a chomp.

He thought that dogs might make good transportation for tiny dinosaur models and hopped on board.

Email ThisBlogThis!Share to TwitterShare to FacebookShare to Pinterest
Labels: Alex

Considering that I've only begun to really research dinosaurs in depth (beyond the basics in biology in high school), I was very eager to see the take of the Creation Museum on such incredible animals.  I was curious if they would present the outdated information like I found in books as a child or if their information would be up to date.

I was pretty disappointed; they had some really neat displays with dinosaurs, but they seemed to be ignoring recent research. Aside from one Archaeopteryx, there wasn't a single feather on a dinosaur, in spite of the fossil records showing otherwise.  Nearly every dinosaur held their forearms in an outdated pronated pose.

There is no discussion presented at the Creation Museum regarding the possibility of feathers or the inability to pronate forelimbs.  No mention of recent research showing that dinosaurs may have had feathers.  In fact, if I had gone into the museum not knowing anything other than what I learned as a child, I would have no idea that paleontology had made advances in the years since I was little.

The Answers in Genesis web site says nothing about the pronation of forearms, but it does at least address the issue of feathers and dinosaurs in a dozen or so articles.  In one article posted on their web site, they do state, "There is nothing in creationist theory forbidding dinosaurs from having feathers..."  If this is true, however, why aren't they willing to present the idea as at least a possibility in the museum?  The rest of that article as well as several others (see article links below) all seem to suggest that accepting that a dinosaur such as the Velociraptor had feathers is the equivalent to saying that dinosaurs evolved into birds.  In fact, one cartoon on their site suggests that it is a sin to represent dinosaurs with feathers!

I'm sure this will be repetitive throughout my posts commenting on the museum, but I honestly felt that the museum was a place where you were to accept what you were told and never question the information.  This is a prime example, essentially they expect you to accept that dinosaurs cannot have feathers, period, because to even consider it would be to believe in evolution.

As far as what I believe, I do think it is entirely possible that many of the theropods had feathers, and warmly welcome the idea of the fluffy, feathered dinosaurs of modern paleoartists.  The beauty of dinosaurs is that we don't know everything and that is where my artistic brain can fill in: colors, shapes, feathers, fuzz, etc.  I believe God could have created dinosaurs with feathers, without feathers, with half-feathers/half-scales, or pretty much anything else He can imagine.  I'm not comfortable with the idea that birds evolved from dinosaurs, but I also don't believe this can be proven or disproven.

Links to Make You Think:

My Carnegie Baryonyx arrived in the mail today.  I've named him Alex and he will be the "mascot" of this blog (similar to Rexford at Dinosaur Toys Collectors Guide Blog).  After opening his packaging and removing his swing tags, Alex and I just hung out.  I have the stomach flu so was spending the day in bed watching movies.  I made the mistake of letting Alex choose, so we watched The Land Before Time.  Alex was, of course, disappointed to find that a Baryonyx wasn't a character.

For supper, I had a cup of soup, which Alex thought meant fishing time.

Unfortunately, there are no fish swimming around in chicken and rice soup and all he caught was a cracker.

What is This Blog About?

I strongly support open inquiry, questioning, and the scientific method. Having grown up in a church, but also loving science, I honestly believe the two can coexist, but there is so much conflicting information out there.
This blog was started after a visit to the Creation Museum caused me to realize that there were many Christians and many scientists who believe that Christianity and Science cannot ever agree. My goal is to do my own research and come at this from a very open view point in hopes to find the real truth.
In addition to the serious science, I plan to blog about my new affection for dinosaurs, including model reviews and fun posts with my "dino-friend" Alex.